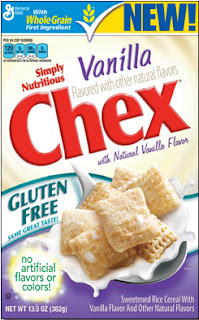 I have to admit, I do like to indulge in Chex cereal every now and then, for breakfast, as a snack or even dessert at the end of the day.  And if not to eat in a bowl with milk, then I love make Chex mix, like Reindeer Chow during the holidays.  Sometimes I will even use the Rice or Corn Chex in place of bread crumbs in savory dishes.

General Mills recently introduced the newest flavor of Chex cereal, Vanilla, to their gang of gluten-free Chex cereals*.  I have to admit, while most people are fans of chocolate, I love me some vanilla!  Hot chocolate, egg creams, ice cream....I always go for vanilla!

And you should too!  Vanilla Chex are now available on grocery store shelves nationwide.  And to make it a little bit easier and sweeter, General Mills sent me some coupons for a free boxes of cereal to pass onto others.